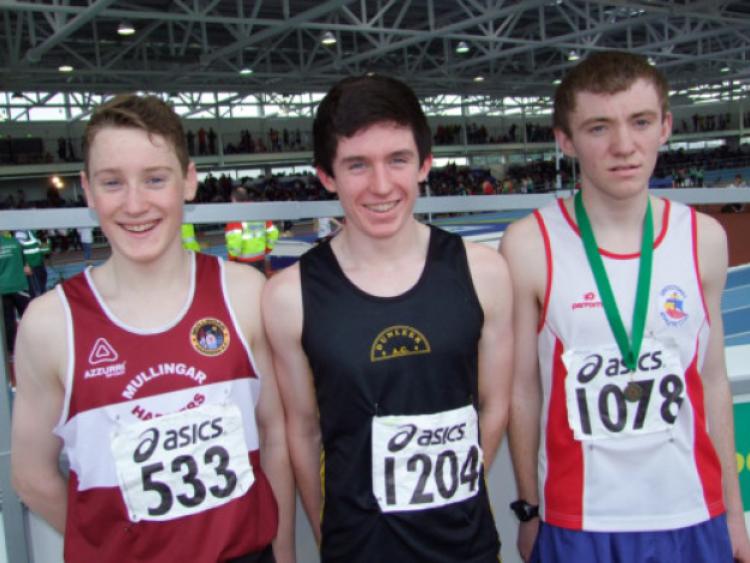 Inspired no doubt by the Irish successes at Gothenburg at the European Indoors recently, the Dunleer AC juveniles produced some terrific performances at the Athlone International Indoor Arena last weekend.

Inspired no doubt by the Irish successes at Gothenburg at the European Indoors recently, the Dunleer AC juveniles produced some terrific performances at the Athlone International Indoor Arena last weekend.

Garry Campbell continued his domination of middle distance running in his age group winning the U16 boys’ 800 metres in fine style. Garry never looked in difficulty and ran a controlled race throughout, with a superb kick on the last bend to ensure his top placing.

Clubmate Jack McCullough, on the back of a brilliant cross country season, with the U13 Leinster title and silver in the National Cross Country U13 under his belt, produced a brilliant run over the four lap 200m track to finish in second place winning his first Indoor Championship medal.

The Dunleer AC girls showed their sharpness in a range of events also, with the hugely talented Emma Fay winning the girls U19 800m with Emma Cheshire making her way onto the podium in the high jump once again, this time bronze U14 and Aoife Holmes returning to good form with a 4th place in the high jump in the girls U13 category.

Making their way through the rounds of heats, semi finals and finals were Anthony Dillon (60m), Emma Cheshire (60m), Niamh O Connor (60m) and Erin Orr (LJ and 60m), with all placing in the top eight in the Province.