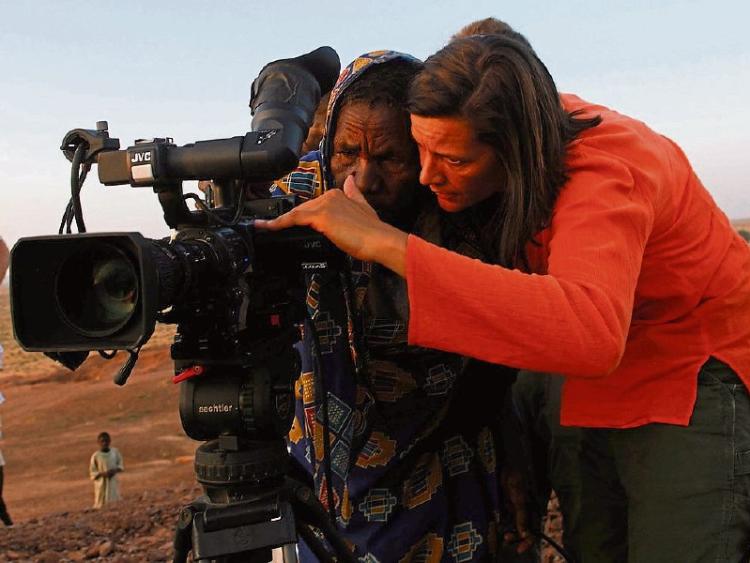 What you see is what you get….or is it?

That is one of the many questions proffered in this new documentary film, Cameraperson, from Kirsten Johnson the critically lauded DOP of documentaries such as Fahrenheit 9/11, Derrida and Pray the Devil Back to Hell.

A visual collage comprising footage drawn from Johnson’s 25 years as a documentary cameraperson including footage from the aforementioned films, this documentary remixes and offers up snatches of moments that together coalesce and form an intense exploration of how art and the real world and life interact with one another.

It's a treatise on or essay film about how memories form and what it might possibly mean to bear witness to real events. As it weaves through her filming experiences in her native United States, in Nigeria, Liberia and Rwanda, in Bosnia and Afghanistan, the film emphasises the human element in cinematography and so it follows in filmmaking as a whole.

This is no sexy sizzle reel meant to seduce would be employers, no slick advertisement for some cologne, there are no polished simplified narratives at play here either.

Rather, Johnson has opted for all those moments we are usually not privy to, throughout the film, her camera shakes, readjusts and even turns off. Behind the lens, we hear Johnson sneeze, gasp, curse and cry – and often she simply has no idea what to do next.

What we are shown is the filmmaker and specifically the documentarian, not as an impartial, impassive observer, nor as an artist spurred on by some spark of genius, but rather as a working person and empathic human being. Cameraperson reminds us that the simplified cohesion of a film is as much a trick as anything, not the reproduction of a true or real narrative, but the product of a long chain of choices and prejudices. One must after all decide when and why to press record.

Film of course is both a political and moral act and the decision-making involved when one makes a film is also questioned here.

The most important question at play here in Cameraperson is the question of whether and how much documentary filmmakers should intervene in the lives of their subjects.

This is perfectly and uncomfortably shown in a sequence in which Johnson holds back on intervening in a potentially disastrous encounter between a small child and an axe.

The challenge of maintaining this simultaneously active yet passive role is again even more powerfully depicted in two further sequences shot in an unnamed Nigerian hospital.

We watch a midwife in a seriously under-equipped hospital attempt to save the life of a newborn who is struggling to breathe, Johnson again the helpless observer; as viewers we share her fear, her desire to do something and ultimately her utter helplessness.

We are aware that the baby is the second of twins with twins being close to Johnson’s heart as in a number of sequences we also meet her own twins. These moments once again pose the same ethical issue, by filming and showing us her children before they become old enough to give their consent to be filmed is Johnson taking advantage of them? Again same questions is asked when we meet Johnson’s mother, who is suffering from Alzheimer's disease who is unable to understand fully that she is being filmed or what that might mean.

Later Johnson further emphasises this question by showing us a Syrian filmmaker as he asks an audience “How do we represent horror, represent death, whilst respecting the golden rule – dignity?” in a particularly powerful and topical scene.

This final query is perhaps what audiences will take from this truly mesmerising piece of cinema.

When increasingly filmmaking seems to be obsessed by meaningless action while alienating the audience from any attachment to the real world and the real lives of the people in it, a world in which we now have things called “alternative facts”, Cameraperson could not be more vital, necessary and important.